It is said that to have had an accomplished life one should have had a child, written a book and planted a tree.
I can’t guarantee i haven’t got any children, I’ve written two books and, as for the tree, I planted one somewhere in Nepal. 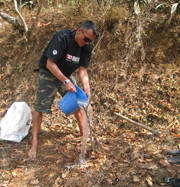 The vineyard of peace is known world-wide. It was created in memory of Samuel Farinet and is the smallest vineyard in the world. It belongs to His Holiness the Dalai Lama.
My name will be immortalised, alongside those of Abbé Pierre, Zinedine Zidane, Michael Schumacher, Paul-Emile Victor, Mike Horn, Bertrand Piccard, Claude Nicollier, Maurice Béjart, Gina Lollobrigida, Renaud, Jean-Louis Trintignant, Alain Delon, Kofi Annan, to name but a few, for eternity.
I can think of no greater honour than to have had a plaque in my name set next to that of Sister Emmanuelle. I have to add that it is rather impressive, albeit quite typical of the « Spirit of Farinet » that my speech, in which I made a point of mentioning that I’d spent time in the same prison as Mr Farinet after I’d escaped from a train travelling from Sion to Lausanne, was applauded by the highest ranking official in the canton of Valais.
And last but not least, I’m the first person in the vineyard to have deliberately stolen someone else’s quotation and used it proudly for his own plaque!

When the chef Didier de Courten was confronted by an irritated customer from Lausanne,

the evening nearly ended in a fight. 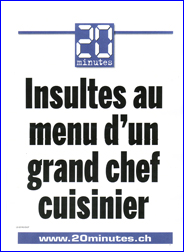 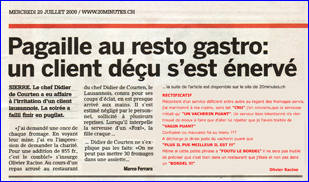 LAUNCH OF SHOES ON A SWISS POLITICIAN 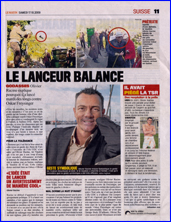